If Fodderstack Could Speak: Logging Days

Written by Jeremy Lloyd, Manager of Field Programs and Collegiate Studies and author of A Home in Walker Valley: The Story of Tremont

This occasional series is named for the mountain overlooking the Walker Valley campus of Tremont Institute in Great Smoky Mountains National Park. If Fodderstack Mountain could speak, these are a few things it might reveal.

Almost immediately after the Little River Lumber Company ceased its logging operations in Elkmont, rails were removed and laid along the Middle Prong. By this time, around 1924, five years had passed since Will Walker’s death, and his daughters, who desired a better life elsewhere, had sold the land to W.B. Townsend. Logging would continue in the valley till 1938. 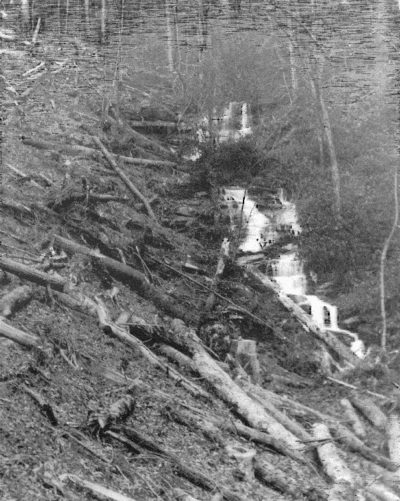 Melvin Ownby recalls living along the Middle Prong during those years: “The company had us a new house – one that could be loaded by something like modern cranes – called a loader. Set on a logging flat car moved wherever they wished, set you off in business again. Didn’t even have to move your furniture separate. It stayed in the house as it was being moved. We moved to String Town, so called because the shacks were set off so thick on each side of the railroad. This was a new house built from spruce pine lumber. The bed bugs were so bad we had to heat water and give the whole house a good scald job.”

Bessie Abbott grew up in Fish Camp, Elkmont, as well as in Walker Valley. For eight years she lived in a house, possibly a car shack, near where the Tremont pump house is located today. Her older brother ran the store at the Tremont company town upriver. At one point there were so many children that three separate schools were in operation: one each at Tremont, Mark’s Cove, and Lynn Camp. For a time, students who wanted to attend high school in Townsend had to walk six miles every day (three miles one way) from the company town down to Walker Valley (Walker Fields), in order to catch the bus into Townsend. Bessie of course was spared this inconvenience because she lived near where the bus picked up students. Eventually, a road was built next to the railroad, allowing the bus to go all the way up to Tremont company town.

As for summertime, “We was just free to do whatever we wanted to do,” said Bessie. “And chores, we never had chores. There wasn’t anything to do. I washed dishes and helped in the house, you know, and that’s all the chores there was. But it sure was a happy carefree time up there for children.”

Her husband, Ed, remembered building railroads for Little River Lumber Company. Before skidders could be brought in, workers would “swamp out” a path and lay the rails, always moving ahead of the locomotive to make way for it. About two hundred logs could be cut in a day, and the crew that cut the most logs was given cigars as a prize.

Fires were a constant danger during the logging years. Their cause could be attributed to sparks or ashes falling from coal-fired skidders and engines, or possibly to a disgruntled worker fired from his job. Some people set fires simply to watch the woods burn. One fire on Sam’s Creek devoured cut timber waiting to be loaded on a skidder landing. Another fire near Sam’s Creek was so bad the CCC boys along with male high school students from Townsend were recruited to combat the blaze.

Bessie recalled her teacher telling her about the coming of the national park. “I remember him telling us we might be able to sometime say we had lived in a national park. But it didn’t bother [people] because the job was ending anyway and everybody was going to have to move away. So the idea of the park didn’t bother them.” When asked if she thought people expected to have continued logging, she said, “I think that people knew that when that job did play out that they’d have to find them someplace else to live,” Bessie added.

Just as logging was coming to an end, aluminum production was revving up at the aluminum plant in nearby Alcoa, which made for a fairly smooth transition for some people. Others decided to return to farming. While some of Bessie’s logging neighbors moved to Seymour and Sevier County, many descendants of Will Walker settled just outside the park in Townsend, as well as on the flanks of Nebo Mountain in Walland.

Your generosity supports life-changing experiences that foster a deep and meaningful connection to nature, now and for years to come.

Make a Gift to Tremont Today

The Great Smoky Mountains Institute at Tremont is a 501c3 nonprofit organization.