To my fellow monarch enthusiasts,

With the help of over three hundred community science volunteers, led by our dedicated and knowledgeable team of monarch educators, Tremont’s 2019 monarch tagging community science program was a huge success. We tagged 694 monarchs as they journeyed south to spend the winter in the Sierra Madre Mountains in central Mexico.

From figure 1 we see a similar pattern of movement through Cades Cove that we have seen in previous years, with monarchs trickling in starting mid September, peaking around the second week of October, then dwindling again. Despite the low number of tags in late October, even in the final days of the program, monarchs were still seen flying high over the fields in great numbers. September’s drought followed by heavy rain and a rapid drop in temperature was correlated with a low number of flowers present in the fields. With no reason to drop down to nectar perhaps the monarchs spared their energy for better pastures during their journey. 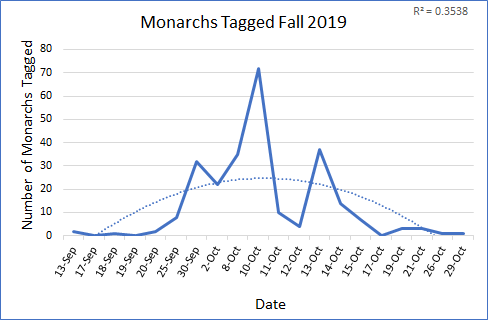 Why do we start our tagging program in mid September?

While it may be disappointing to not tag a monarch on the date that you sign up, it is vitally important that we have volunteers on each of our public days, not just the busy mid October dates! That way we will be capturing any pattern changes in monarch populations as they pass through our Great Smoky Mountains National Park over time (for a look at the numbers since 2002, refer to figure 2 below). Will they arrive earlier or stay later as the climate changes? How will their numbers be affected by these changes? With your help, we will continue to learn about these incredible migrators.

Thank you so much and I look forward to seeing you next year!

Learn why Tremont is using “community science” instead of “citizen science.”

Figure 2. Monarchs tagged through Tremont’s community science project since 2002. Note that the numbers can be misleading, as the first few years had only 2–3 volunteers tagging over a shorter period, compared to over 300 volunteers tagging in 2019.