Whistle and Fish in Walker Valley: The Shadow, the Pool, and the Fool

Eddy: A section of calm water caused by something in the current’s way. Sometimes you can see water moving back upstream right behind the obstruction.

Walking upstream on a sunny afternoon, I stopped by a deep pool on a bend of the Middle Prong. The water comes out of a fast-flowing section and gets forced between a rock shelf and the bank. The main current gracefully bends along the river left side bank which was built up during construction of the railroad some time ago. It pushes against a great big slab of Metcalf Phyllite and then spreads out at the bottom of the pool as the river becomes more shallow and continues its relentless journey downstream. On the other side of this swiftly flowing channel, the water swirls back upon itself in a deep eddy. This is one of the rare pools of the Middle Prong where you can’t see the bottom. As the water gets deeper, it takes on an emerald glow. You can see shapes rising up from the depths, only to disappear once focused upon, flickers of motion that suggest something other than a leaf in the current.

The shadow in the pool swam right into my brain that day. I had to know more. 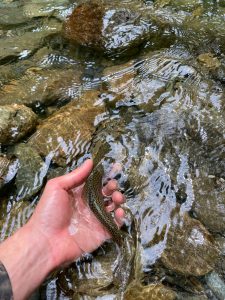 On this day, while peering into the depths, I saw it—a huge shadow, its upstream motion catching my eye. At lightning speed my brain ruled out a shadow from a bird or flying object; too torpedo-like and the shadow was in the water, not on top of it. A quick glance up confirmed this: nothing between me and the sun. My brain told me it had to be a fish. I wanted it to be a fish.

I followed the shadow as it hugged the outside of the eddy, just where the water takes on the emerald glow. It was enormous. My conservative estimate would put it at least 30 inches long. While brown trout can reach these sizes, I thought it unlikely that a monster found its way up the Middle Prong. Can that happen? Everything I had read and experienced pointed to mostly rainbow trout in this river. Could it be a redhorse? These carp-like fish can get pretty big, and I have found them a bit further downstream. Whatever it was, at the top of the eddy it crossed the current and disappeared from view.

The shadow in the pool swam right into my brain that day. I had to know more. I went to bed and resolved to start at that same pool tomorrow and do some deeper fishing in order to see what I could turn up. Images of giant trout and epic battles accompanied me as I drifted off to sleep.

The next day I arrive at the pool ready to fish. Waders, fly rod, tackle, some sunglasses, and most importantly, with resolve to find out more and the confidence that I will find something, whether or not it is what I set out looking for. I approach from the downstream side of the pool. In the glass-clear, small streams of Southern Appalachia, stealth should never be overlooked. I cross the river slowly, keeping my upper body still.

Sometimes the brain will see what it wants to see. 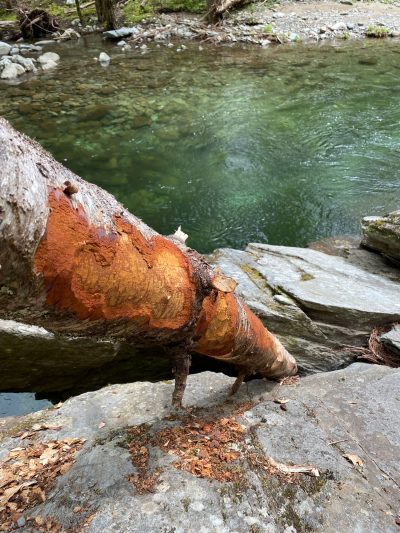 Once across I walk to the forest’s edge, taking care that my shadow is not on the water. My plan is to move to the top of the pool and work my way back downstream. I will be making my first casts from a crouch at the water’s edge, gradually moving into deeper water where I can begin standing. Fish are constantly looking for threats from above—best to stay out of the field of vision. I have known fly fishers—myself included—to army crawl to the stream edge in an effort to avoid detection.

I begin to move to the top of the pool when I see it. Spooked out of its hiding place not far from where I entered the water, the shadow comes moving upstream. This dark, oblong shape goes right past me, allowing for a spectacular look. It was shaped like a bomb, complete with big ole webbed hind feet and a distinct paddle tail. To my surprise and embarrassment, it was a beaver.

I felt like a fool! I should have known. With the first glimpse, the list of explanations was long. For me, the list stopped at fish. In that moment my brain happened to forget about the beaver-chewed logs on the slab rock that I clambered over many times to fish this very spot. Sometimes the brain will see what it wants to see.

At Tremont, this phenomenon happens frequently with students in the field. We love to explore nature mysteries. One of our goals as naturalists here is to have students explain what they find in nature themselves, with guidance from the naturalist. We do this by focusing on observations we see all around us. What do you see, and what can it tell you? Try not to jump to what you think you know. Pay attention instead to what you see right in front of you, and what it can tell you. If it is an animal sign, a great starting point is to ask, “If I wanted to make this same mark myself, what tool would I need?”

Arriving at a plausible explanation of something found in nature can be challenging, even more so if you happen to be someone who has never been to the mountains and really wants to see a bear. If you are looking only for bears and bear signs, the dimpled marks of a Pileated Woodpecker on a tree can begin to look like claw marks. If you are looking only for big fish, you might be blind to the beaver right in front of you.