Every year, we monitor our breeding birds in Walker Valley by setting up a series of 12 m long soft mesh mist nets on our campus once or twice a week.  We check the nets every 40 minutes, remove any birds that get caught, bring them back to our banding station for processing, and release them unharmed to go about their business.  Getting caught in a mist net does not hurt the birds, and our citizen science team is trained with special techniques for safely extracting them.

We take several measurements of each bird including wing length, mass, fat content, extent of body and flight feather molt, flight feather wear, feather age, etc.  We use these characteristics to give us clues to the bird’s overall health and age.  It’s like fitting together the pieces of a puzzle! 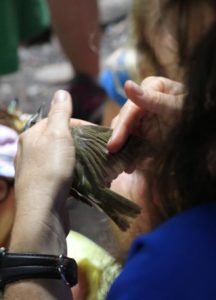 Since we have been banding songbirds in Walker Valley since 2002, we have accumulated a long-term dataset that helps us to understand the number and distribution of species that breed here, the age structure, habitat structure and change, and other factors.

Recapturing individuals from year to year is exciting because it tells us not only how long the bird lives, but it also helps us to understand more about habitat selection and recruitment of young birds into the adult population.  For example, if we band a juvenile bird in its first summer and catch it as a breeding adult the following summer, we know that it was successfully recruited into the adult population.  This is good news for a healthy reproducing population. 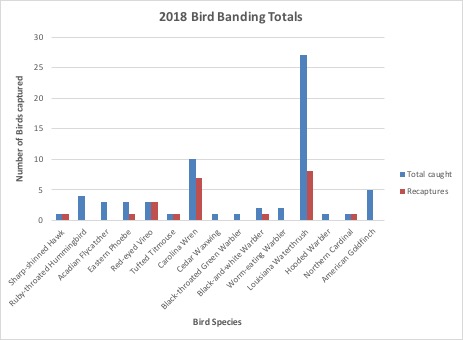 This graph shows the number of each species of bird we caught during the summer of 2018, compared to the number of recaptures of each species.  We caught and recaptured more Louisiana Waterthrushes than any other species, which is what makes us so well-positioned to study them as part of ongoing research.  Check out Lee Bryant’s research.

My favorite capture for the season was a juvenile Sharp-shinned Hawk that completely took us by surprise on one of our very last banding days.  Our nets are designed for smaller birds, so anything bigger than a Robin usually bounces right out.  The hawk drew a sizable crowd of awe-struck humans as we gingerly banded and measured it.  Its bright yellow eyes were piercing and beautiful.  We were humbled to hold such a majestic creature. 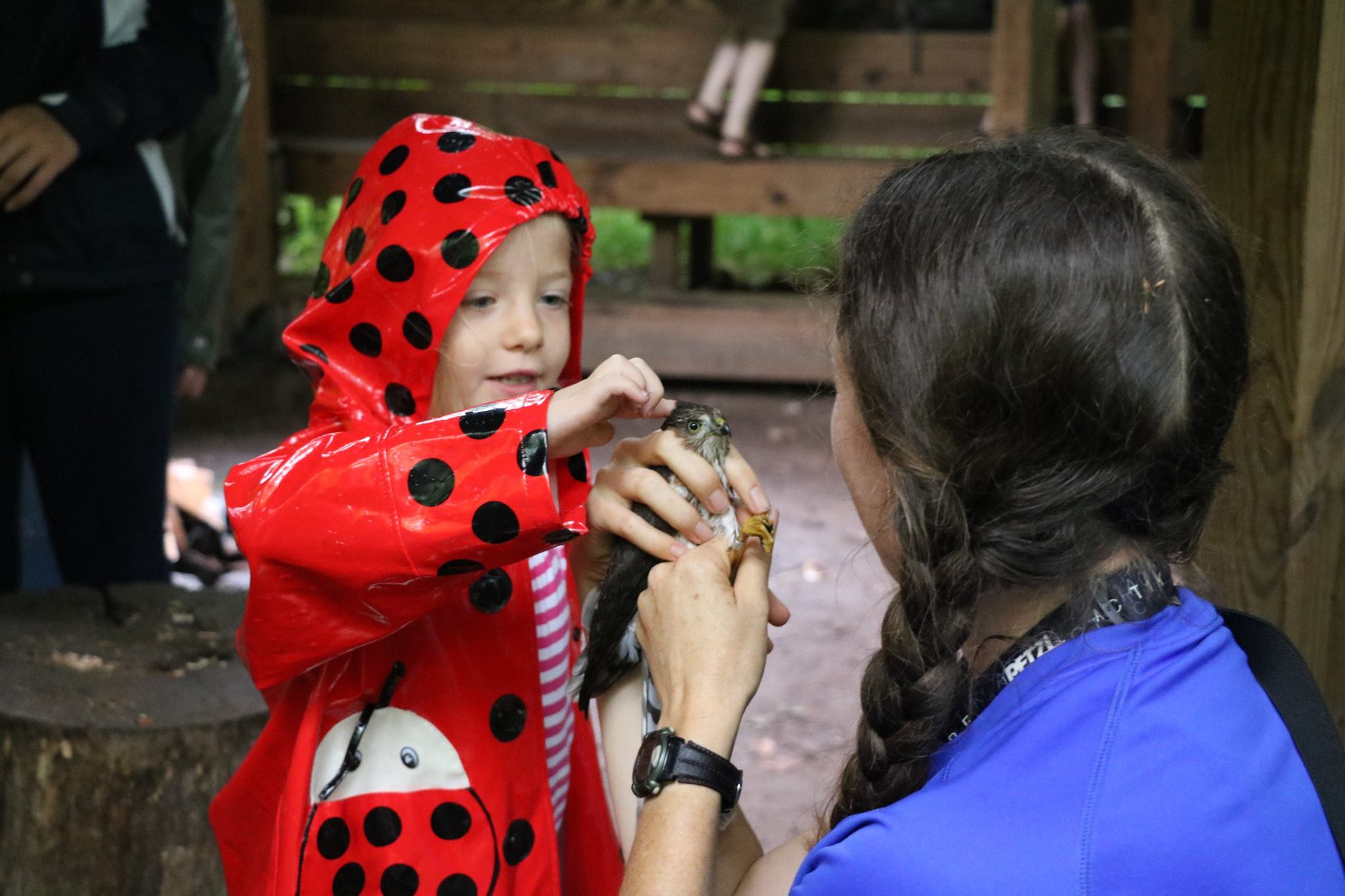 Another of our favorite moments was when a female American Goldfinch didn’t fly off immediately once she was released.  She hung out on a branch just outside the Council House, looking down at us.  As soon as we released the next bird we processed, a male American Goldfinch who was caught at the same time, she chipped and then flew off with him.  It seems she waited for us to release her mate from bondage!

We have many stories like this from our adventures in bird banding.  Our banding station is open to the public and we enjoy teaching people of all ages how to safely hold and release wild birds.

Bird banding by the numbers:

Come out next year to enjoy an up-close encounter with our feathered friends!  Our 2019 banding dates should be posted by May.