If Fodderstack Could Speak: Homeplaces (Part 1) – The Dorsey Place

Written by Jeremy Lloyd, Manager of Field Programs and Collegiate Studies and author of A Home in Walker Valley: The Story of Tremont

This occasional series is named for the mountain overlooking the Walker Valley campus of Tremont Institute in Great Smoky Mountains National Park. If Fodderstack Mountain could speak, these are a few things it might reveal. 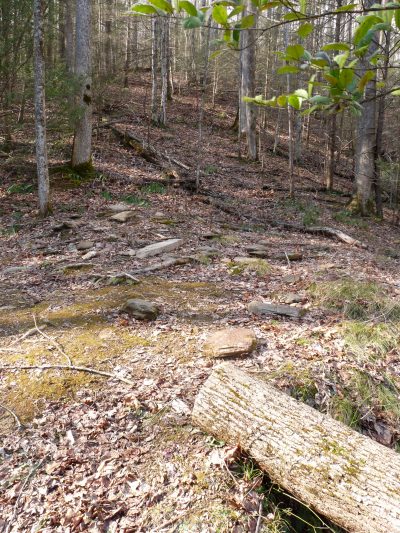 There is something appealing about the unique way people in Appalachia, and elsewhere, refer to their place of residence. A house isn’t just a house, but a homeplace—even sometimes just a “place.” As in, “The flowers are right pretty over at the Stinnett place this time of year.” This term, unique to North America, is believed to have entered common usage sometime around 1730-40. It is perhaps due to the transient nature of many Americans that we seldom hear it any more.

While no structures from pre-Park days exist in Walker Valley, we do know a few things about the homeplaces that once resided here. Two sit on the side of a steep hill along a wagon road that once led from near where banjo picker Ashley Moore once lived on a bank overlooking the Middle Prong, to the Spicewoods. In the 1970s, the Youth Conservation Corps built a path Tremont uses for hikes and lessons. If you’ve ever hiked the Dorsey Trail, you’ve passed the remains of each of these homesites.

The upper site was the Dorsey Place. According to brothers Frank (born 1909) and Jack (born 1912) Moore, it was made of heavy tuliptree logs. The lumber was not milled but hand-hewn. Unlike most residences, it was not a one-room house. It had a porch, which back then was considered a room, plus two more rooms downstairs. One of these was possibly an offset or “granny” room. In addition, there was a loft upstairs. The structure would have been built sometime in the early 1900s.

The house evidently had an iron stove, and until a few years ago a piece of it could be found sitting next to the old chimney stones. Unfortunately, it has gone missing. Other than the chimney stones the only piece of evidence revealing that a home once occupied this site is a pit where the root cellar would have resided under the floorboards of the porch. Nearby is a spring that is dry most of the year.

It is known that John McCarter lived at the Dorsey Place, though during which time period and for how long is not known. Presumably, Bill and Sally Dorsey also lived here for a time. Their closest neighbors were Newt and Hettie McCarter who lived in the Spicewoods. After the McCarters moved away, the Dorseys left their place and moved to the Spicewoods. It’s possible that Loon Grant Moore along with his wife and his son Ashley lived here. This is unconfirmed, and if it is true it would have been after the long period they lived at a house further down the valley, near where the second bridge crosses the Middle Prong.